History may not repeat, but…

Somebody from a private forum I belong to known as “T-Theory” posted a graph that shows the rationale for being long the S&P when the 10 week exponential moving average is trending above the 50 week exponential moving average and being short in the opposite case. T-Theory is an approach invented by the late Terry Landry to viewing market behaviors in terms of cycles – that is markets tend to spend half of their time rising at a faster pace than the other half of the time and that these periods tend to occur symmetrically. For a more detailed explanation of T-Theory, see http://cdn3.traderslaboratory.com/forums/attachments/34/31965d1350013176-beyond-taylor-a1997introttheory_.pdf 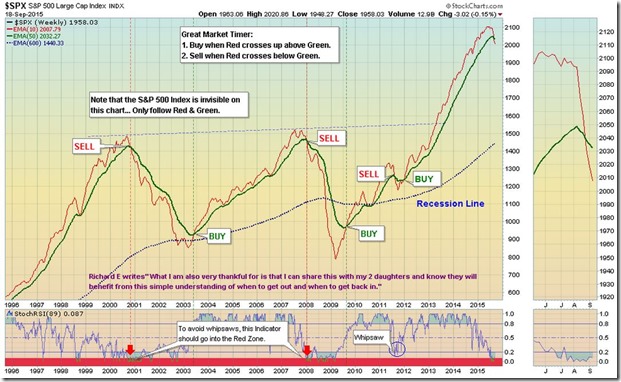 Clearly, this was a good strategy since 2000. I decided to quantify the benefits since then as well as over the longer-term using my equities database. I recently added .NET SQLCLR (A mechanism for Microsoft SQL Server that allows one to write .NET code and integrate into database functions) functionality to my SQL Server database that makes it relatively easy to calculate different technical indicators on the fly. I have been able to build a library of technical functions that are available from within the database. It is easy to find samples of C# code for calculating technical indicators such as the EMA that can then just be plugged into the CLR. I will write a more detailed post that includes samples of the CLR code and implementation process if that is of interest.

Below is the query to calculate the average return per week with being on the “right” side of the trade from the picture. I used a temporary table because executing the CLR function inline and joining is slower than storing the results into a temp table and then joining for some reason.

The results show a significant benefit since 2000 avoiding a weekly loss of almost -0.2% during downtrends and achieving over 0.2% gain on the uptrend.

But, what about the longer-term? For this, I regenerated the temporary table using the Dow from 1928. This also shows a definitive benefit to being on the right side of the trade. In fact the performance on the upper cross-over is 8 times better per week and the performance on the down cross over is negative by -0.026 %. While -0.026 seems small, that is significant considering the Dow itself went from 240 to over 17,500 (it has lost over 500 points already since it’s EMA crossover trend change). And this is only the weekly loss, not the cumulative loss from when the trend changes. I will quantify the total amount of changes on average between crossover changes in a later post, but just looking at the crashes of 1929, 2000, 2008, etc. this has often historically amounted to over 50%

Is past history guaranteed to repeat? No, but when something has worked for almost 90 years it gives cause to pause.

Even though history does not always repeat in the same fashion, it does rhyme – that is cycles tend to repeat. The conditions associated with 2001 and 2008 are different from today but unfortunately bear enough similarities (i.e. high valuations like 2000-2001, high debt and slow growth like 2007-2008) to make a case that a negative cycle in equities is unfolding again. I’ve already documented this through some other postings related to not only the long-term technical indicators but fundamental indicators such as the ratio of GDP to market cap, Schiller’s 10 year Cyclically Adjusted Price Earnings (CAPE), wealth growth versus growth of stock prices, etc.

Psychologically, it is difficult to change one’s mindset often until too late. I”m afraid many will jump into equities more and more aggressively on the dips rather than take risks off the table at high points. The type of trend that has started could easily lead to further drops of over 50% from current values based on a reversion to mean. At some point, capitulation occurs where people sell out of the market at the point where it actually has bottomed and don’t resume buying until the indexes have once again risen too much.

A common answer to this corundum it that it is impossible to time the market and so one may as well just buy and hold as it always comes back. But, how long can that take? The stock market peak of 1929 took nearly 30 years to recover and Japan is still only about 50% back from the peak of 1989.  Will a large decline in equities in the US take that long to recover from? That seems unlikely based on history, but the possibility that recovery to the recent highs may take a decade or more has been proposed by some market strategists who have predicted prior bear markets such as John Hussman (http://www.hussmanfunds.com/wmc/wmc150921.htm).

Execution of the EMA crossover strategy does mean that one would not sell at the best possible point or buy at the lowest point and would miss out on a perfect strategy, but the results are far better than simply buying and holding. It seems to me wiser to follow a model that has historically proven most likely to succeed over the long-term when making investment decisions than to just hold and hope for the best rather than plow into a market that from a long-term technical perspective is now likely in decline.

2 Responses to History may not repeat, but…