Note: My first version of this had an error in the query which has been corrected and the difference between up and down days is not significant. However, the larger the VIX change, the more likely to be a VIX up day and S&P down day the next day.

Today was an interesting day in the stock market. The S&P 500 closed positive while the most correlated indicators aside from other equity indexes closed strongly negative.  This includes Treasuries (up) and high yield/corporate bond (down). These are all the opposite results of the norm, at least for the last several years. Along with that volatility was down significantly, which does correlate with upwards moves. Since this seems to make the move in the S&P suspect in terms of at least the immediate term, I ran a query in my equity history database. I used the cube with the grouping function to get a rollup of each grouping and the entire selection.

Below is the query:

Although I have history of the S&P back to 1950, some of the other instruments only go back to 1990, so the analysis is limited to then. 195 instances were found that met the condition over a 25 year period, so this only has only happened on average about 13 times per year.

Results for Days where VIX is down while High Yield is down, Treasuries are up, but S&P 500 is up: 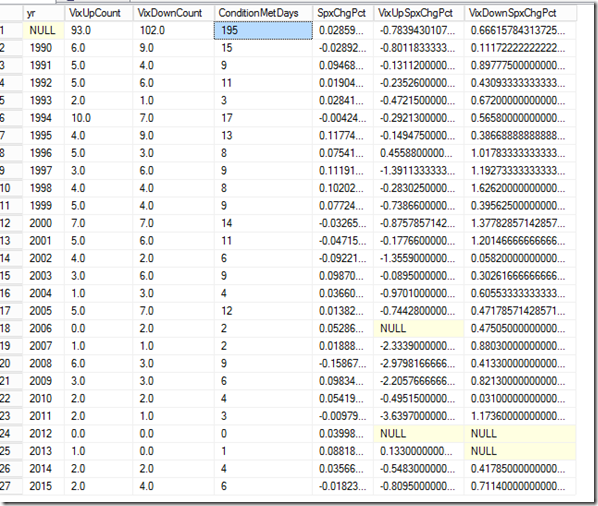 Out of 195 instances, VIX was up the next day slightly less often (93 versus 102 instances) test.  Along with that, the average change on the days that the VIX went up was negatively much stronger than on the VIX down days. The up days occur most often during tumultuous markets such as 2000 and 2008. Below are the detailed results.

Note that if I decrease the change percent to –7% which represents the percent change in the VIX today, the likelihood of a down day is higher (15 to 12), but with such a small number of instances, it is hard to make a case for trading based on that.

More interestingly would be to look at technical indicators such as MACD, RSI, etc. associated with the instruments and examine how these interact over longer periods in this type of configuration, but that takes more complex queries.

The usual disclaimer applies: I.e. I am not a professional investment advisor, short-selling and options involves significant risks including complete and total financial ruin, talk to your personal financial counselor, etc, etc, etc.